The next inventor to utilize vibration technology for health and wellness was Dr. John Harvey Kellogg in 1895. He claimed his Michigan-made vibrating chair was a magic pill that cured any ailment you can imagine. In the 1960’s, the Germans picked up on the health and wellness benefits that vibration technology offered by developing an exercise technique called rhythmic neuromuscular stimulation.

Then Russians took it to another level. They were having issues with muscle atrophy and bone density with their cosmonauts. One of their scientists made a discovery. If they took the same technology that your grandmother used with the exercise belt that she put around her waist for weight loss, but used it in a different application it had a different effect. On a oscillating platform, with a see-saw effect, they could conquer the effects on the human body of being in outer space for long periods of time.

Soon after, NASA adopted a form of this technology, then the sports associations adopted it. The size and cost of the machines kept it out of general public market. China opened up for major mass production manufacturing, several companies started making a lighter and smaller version of the product. This drove the price down from the $20K that the larger machines sold for, to an affordable price for the home and workplace.

Our machine is designed specifically for wellness. Many years ago, people did more walking and lifting, not sitting. There are also more identified illnesses today. We have discovered that a person who can devote 10 minutes twice daily, 5 days a week can see dramatic results. Consistency is the key. 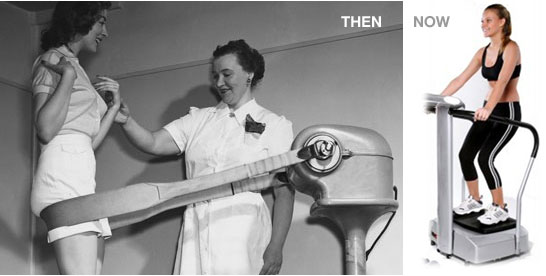 Our machine duplicates walking at a pace a person normally couldn’t achieve, all without impact on the body. It is also designed to handle weight up to 400 pounds. The machine can be set to operate at low speeds. Our secret to this involves torque and motor controls. Our machine is heavy duty, commercial grade , smooth and quiet running. It has a variety of settings for time and speed control. It’s been retrofitted with American parts delivering you a Rolls Royce quality machine.

We invite you to call or email us today to arrange a complimentary demonstration of our Whole Body Vibration machine.